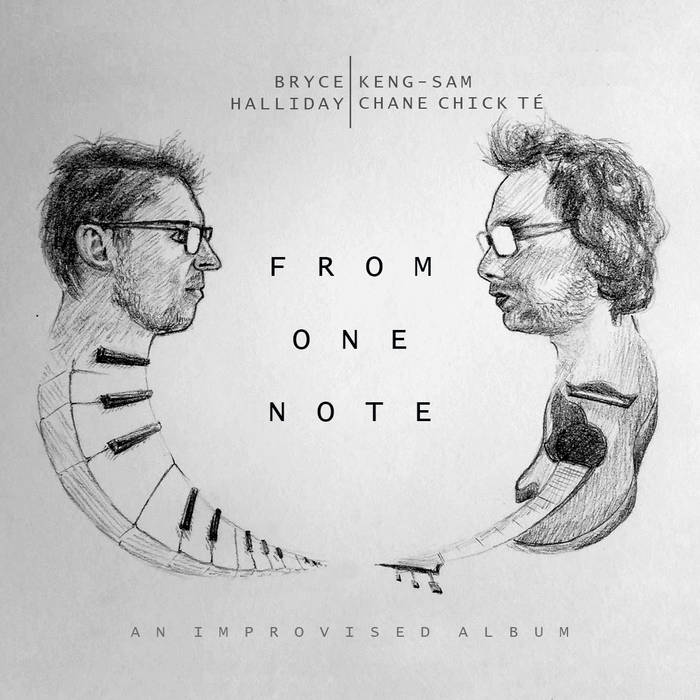 From One Note is an hour long, completely improvised album, recorded in real time, in one take, performed by Bryce Halliday and Keng-Sam Chane Chick Té.

Keng-Sam is a musician, improviser and film-maker from Réunion Island. Bryce Halliday is a comedian and musical improviser from Sydney, Australia. In mid-2015 we were both teaching at an improvised theatre festival in Canberra called Improvention. We had never met, but having seen each other performing and teaching during the festival we connected and decided we must find a time to make music together before we go our separate ways.

On the last day of the festival between the afternoon and evening shows we found an hour we could both set aside. Fortunately Bryce had some recording equipment in his car. We set up microphones in an empty theatre at the Street Theatre complex in Canberra. Bryce on keyboard and Keng-Sam on guitar, then we hit record.

What follows is a fascinating hour of two experienced improvisers playing music together for the first time, starting with one note and building out the piece from there.

Included at the beginning of the album is an edited version of us chatting while we were sound checking. Apart from what you hear there was almost no discussion before the performance about what was going to happen. No key signatures, moods or song structures were mentioned. Every musical idea is entirely of the moment. Over the hour you can hear musical and lyrical ideas being offered, built upon, discarded and returned to.

And apart from mixing the levels throughout the session and adding a few reverb and delay effects in post production there have been almost no edits made to the recording. Every track starts in real time after the previous. A new track in this album simply signifies where a new idea has begun.

Being recorded in one take there are certainly some clunky moments. There are flubbed notes on the piano, the guitar isn’t always perfectly in tune, we sometimes lose the beat. But there are plenty of moments of joy: great riffs, funny songs, lots of drumming on instruments rather than playing them, and soaring moments of beauty. These are the moments that made us want to release this recording to a wider audience. Moments when two minds are totally in sync and all there is, is music.

Rather than single these moments out, we thought we would release the performance in its entirety so an interested listener can hear where the ideas came from. These recordings are available under a creative commons license so if there are moments you would like to sample or remix for your own project go right ahead. If you would like stems of a particular track you are very welcome to get in touch.

In the mixdown Bryce has been mostly panned to the left channel, and Keng-Sam to the right, so particularly in the moments when we are singing, clapping or drumming on our instruments it is easier to tell who is doing what.

Big thanks to Nick Byrne for organising Improvention year after year, without which we never would have met. Also thanks to David Muratore for production advice.

Here's where you can buy/stream a bunch of random other stuff I've composed or performed.